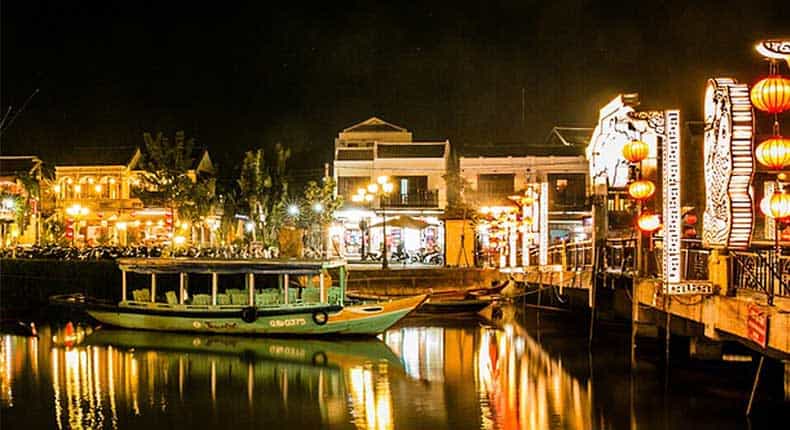 Hoi An, an ancient town located around thirty kilometer south of the Vietnamese city of Danang. It is located on the banks of the Thu Bon River. With western traders as its primary occupants in the early days, this town was famous as one of the major centers for trade in the Southeast Asian region during the sixteenth century. The town possesses a distinct Chinese atmosphere with its narrow streets lined by low, tile-roofed houses. The structures of some of the streets date back to its early foundation years and are still intact. The houses were mostly made of rare wood and decorated with lacquered panels and boards, complete with engravings of Chinese characters on them. Even the pillars were carved with ornamental designs.

Hoi An, also known commonly as “Faifo”, has a population of around 120000 inhabitants and is located in the Vietnamese province of Quang Nam. During the first century, this city had the largest trading harbor in Southeast Asia and to this day, there remains an exceptionally well-preserved example of a port that dates back to anywhere between the fifteenth to the nineteenth century. The name Hoi An translates, in English and all other major European languages, to “peaceful meeting place”. In the year 1999, this old port town was recognized by UNESCO among its many world heritage sites. The main reason was a preservation and further conservation of the of this place as an example of a trading port in Southeast Asia dating back to the period around the fifteenth to nineteenth century.

The best time of the year, in case you are planning on travelling to Hoi An, is the period between May to August. This is the season that experiences calm weather and is most favorable for local tourism. For the remaining period, the weather normally shifts between hot and mild and cold and rain. A visit to the offshore Cu lao Cham island is possible only during this favorable season between end May to end August.

Tourists are expected to follow a strict dress code while touring the old city as a mark of respect for the local traditions and cultures. Men are expected to wear shirts while women should not be seen in a bikini, sleeveless blouse or any skirt that rises to above the knee. It should be remembered that the place is one of historical and cultural importance to the Vietnamese people and not another beach holiday destination.

There is no airport or rail station in the city of Hoi An so the only entry point is through the closest city of Danang. Flights and trains to Danang are frequent from other major domestic cities such as Ho Chi Minh City, Hanoi and Hue with international air connections to Bangkok, Cambodia and Singapore. The local cities also offer for extensive railway services. Hoi An can be easily reached from Danang by bus. The public bus service is quite frequent with buses leaving every half an hour. Foreigners should take note of the fact that the locals and conductors often get together to try and overcharge tourists. Proper guidance may be obtained from the tourism offices in and around the various cities. One can also opt for the traditional boat ride along the cities river system that was used in the earlier days as a trade route to the highlands and into China.

For entering the various places in the Old City, a coupon system is in place that allows entry to an assembly hall, a museum, an old house, a traditional theater and either of the two landmarks- the Quan Cong temple or the Japanese covered bridge. The tickets for the tour are available at various entry points to the Old Town and also some of the major tourism destinations such as Cantonese Assembly Hall. The Japanese Covered Bridge is normally the preferred landmark. It was built by the Japanese inhabitants back in the 1600s before they had to shift to their homeland under strict regulations of sakoku, enforced upon by the Tokugawa Shogunate. A renovation was carried out in 1986. Entry charges are one coupon but it is not uncommon to walk back and forth on the bridge without ever coming across a ticket-checker. A pig statue and a dog statue stand guard at either end of this landmark bridge.

There are also a number of museums that tourists can visit, each of which has been dedicated to a specific trade form that existed in this port town. Some of these museums are listed below:

Museum of Folk Culture: A museum that has documented the dress and culture of people from rural Vietnam in the early days.

Museum of Trade Ceramics: The display is nothing spectacular with its collection of unlabeled and dusty pottery but the magnificence of the building is something worth exploring.

Museum of Say Huynh Culture: Although the main collection of this museum is urns and pottery from the early first and second century, there is also another museum on the upper levels known as the ‘Museum of Revolution’

Museum of Revolution. This inner structure contains an extensive collection of photos of war heroes and weapons such as machine guns, AK47s and grenade launchers.

Three old houses in the town are worth taking a look at. These places are something of an intermediate between a well-documented museum and shabby family residence. Phung Hung House, Quan Thang House and Tan Ky House, only one of which can be accessed, shows the use of Chinese and Japanese form of architecture style by the local architects and is an exciting destination for those who take an interest in ancient architectural and building styles.

Eating out in Hoi An

Even by Vietnamese standards, the food in this port town is very cheap and tasty. Apart from the usual Vietnamese course on offer, there are three delicacies that are synonymous with Hoi An:

Cao lau: A dish of rice noodles that closely resembles pasta in texture. This authentic dish is made using water from a special well in the city and the noodles are topped with dough fritters, sliced pork, and plenty of veggies and herbs.

White Rose: This is a form of shrimp dumpling that is prepared from translucent white dough and bunched up in design to give it the look of a rose.

Wonton dumplings: They are not too different from the Chinese variety and is served either deep-fried or in a soup.

There are a large number of pubs along the river where one can stop by for a quick drink. Bar foods are also common in some of these places, varieties such as fried prawn crackers. Some of these places have “Happy Hour” boards meaning that there can be crazy offers during these periods.

The Bamboo Buddha Restaurant and Lounge, Cafe 99 and Quan Nho are some of the places that tourists can visit for getting a taste of traditional Vietnamese and Hoi An dishes amidst comfortable atmospheres. Rates in these upscale places are quite reasonable. Hong An and Karma Waters are destinations that offer purely vegan alternatives.

For people looking for cheaper alternatives and budget eateries, the following are favorable destinations:

There is no dearth of shopping options in the Old City as any building that is not a restaurant is most likely to be a shop where tourists can buy jewelry, bags, souvenirs, clothes and shoes. The main aim of these places is to sell their wares to tourists and not local Vietnamese people. This results in inflated price compared to other places with most quotations in dollars. Haggling is advisable and also required as the subsequent deals can be really worthwhile. One of the major attractions in the shopping district is the option for getting customized clothes sewn. Tourists have the option of bringing in the photos of any form of clothing and the local tailors are able to replicate the same with customized dimensions within minutes. Some of the places where such custom-make clothing is available are as follows:

Hoi An also offers a wide range of accommodation options for the travelers from budget hotels such as Sunflower Hotel at 397 Cua Dai Street to the absolutely luxuriant and splurge destinations like River Beach Resort at 5 Cua Dai Street. Tourists can find ample number of options to suit their budgets and also meet the necessary standards.

One unique attraction of this old port city of Hoi An can be witnessed on the fourteenth day of every lunar month. On these days, the city says “no” to all things that they consider a luxury such as televisions, motorbikes and even fluorescent lamps. These days, when modern life is given its night off, one can truly feel the atmosphere that prevailed many centuries back amidst the hustle and bustle of this once famous Southeast Asian and Vietnamese port city.