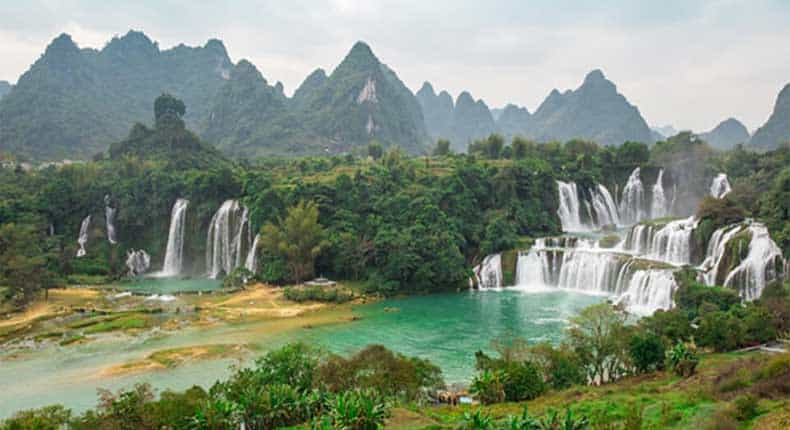 Guangxi is a slightly poor but extremely scenic area in the southern China. Technically, it’s known as the “Guanxi Zhuang Autonomous Region”, because of the area’s Zhuang minority population. The province is southwest of Guangdong Province and also contains a significant coastline on the South China Sea.

Originating in Mao’er Mountains in the Xing’an County, this river flows south east through Guilin City and Yangshuo to the Gongcheng Estuary in the county of Pingle. With four hundred and thirty seven kilometers of scenic beauty, this river is a well-known destination for travelers from every corner of the world.

Sanjiang County situated in the cross sections of Guangxi, Guizhou and Hunan provinces houses two thousand, one hundred and ninety seven families in eight Dong ethnic villages, adding up to ten thousand people. The villages represent the traditional Dong style and are renowned for well-preserved Don-style clothes, buildings, dance and other daily traditions.

This is a symbol of Guilin and became known for looking like a giant elephant drinking water with its trunk. It’s a masterpiece of karst landscape, normally composed of pure limestone deposited on the seabed three hundred and sixty million years ago. A cave known as Moon-over-water cave is situated between the nose and the leg of the hill, which looks very beautiful when the moonlight shines.

This is the most ancient street in Yangshuo with more than one thousand four hundred years of history. It features buildings in both the traditional folk and foreign style. Most of the shopkeepers here are quite enthusiastic and can speak English. The stores boast various types of specialty and cultural goods including paintings, craftworks and calligraphy.

Situated below a huge cliff along the Mingjiang River, twenty five kilometers southwest of Ningming County, the Huashan Cliff Paintings has no less than two thousand five hundred years of history since it was first built in spring and Autumn Period, featuring flashy colors and vivid pictures.

This restaurant was named 1221 because it’s located on the No. 1221 of the bustling Yan’an Road. The restaurant’s interior is cozy and in good taste. Here, you find the authentic Chinese cuisines. Majority of the customers are foreigners, probably because it was frequently reported by the foreign magazines.

This restaurant attracts clients because of its romantic colonial Shanghai setting it had before. Nevertheless, it was recently renovated, with a more traditional western look combined with the decoration style of 1930s Shanghai. Furthermore, it’s a great site for a Shanghai lunch, a light dinner, or even late-night drinks.

This club was initially opened as a private membership club in the year 1999 catering exclusively to the hotel’s in-house guests and its invited members only with authentic and exquisite Shanghai cuisines. The sophisticated Chinese art décor, private club atmosphere, beautiful views of the whole city and its personalized service has gained public recognition both locally and internationally. Because of the popularity, this club is now opened to the public.

This restaurant is located at the junction of Jiangning Road and West Nanjing Road. Because of the careful design by the master, the restaurant has a very elegant surrounding, antique and picturesque décor and deep national feature. The recommended dishes here are deep-fried eel, Sichuan duck and lobster in pepper sauce.

As an authentic Sichuan cuisine restaurant, many special dishes here are worth trying. For instance lazi jiding (chicken nuggets in a sea of red chili peppers), fuqi feipian appetizer (cold beef and tongue doused in chili oil and peanuts), and the delicious and the delicious shuizhu yu (fish slices and vegetables in a flaming spicy broth).

The place provides a great dining environment and palatable pizza with delicious side dishes. This place is always crowded during the dining time and you’ll have to wait in line. The recommended food here includes pizza, clam soup, roasted chicken wing and cakes.

Established in the year 1956, this store is listed as one among China’s Time Honored Brands with the branch on Chaoyang Lu consisting of two buildings; the northern and the southern buildings. Here you can find all kind of clothes and food options.

Here, shops are in the form of small stalls on the both sides of the street. You can get almost anything here. You will certainly find the suitable souvenir for your friends or loved ones.

Well-known throughout Guangxi province this shopping center boasts nine branches across Nanning with the freshly opened Minzu Branch having a total of six floors for shoppers to browse through.

Situated in Jiefang Road, this shopping mall has seven floors, with two basements. The first basement is kid world and the second basement is a furnishing center. The first floor deals in home electric fittings, medicine and cosmetics. You can find shoes, clothes, hats and stationery from the other floors.

Even though not famous for being a high-end shopping center, Heping is a paradise for the bargain hunters.

Overlooking the busy night crowd below, this bar is perched on the fourth floor of a local building and is a refreshing respite during those excessively hot, sizzling evenings.

This club is one among the oldest clubs in Nanning and it has three floors. The first floor is for theme music, the second for high music and the third floor is for disco.

This theatre enjoys a great reputation for performances of the local ethnic nationalities. It includes singing, dancing as well as gymnastic activities.

It opens from 5pm until very late, daily. For a wonderful spot to enjoy both food and drink be sure to check out The Alley.

This is a European style bar with live music. You will certainly enjoy your evening here.

This is one among the first watering holes on the Zhenyang Pedestrian Street. Take advantage of the free internet services offered here as you enjoy your drinks.

There are a number of ways in which a traveler can get around Guangxi province. You can find your way around the province in a taxi, bus or even train. Even though the transportation system here are generally modern, due to the large number of people using the public transport particularly during Chinese festivals and peak holiday seasons, buses and trains can be very busy and it’s advisable to pre-book two or three days ahead.