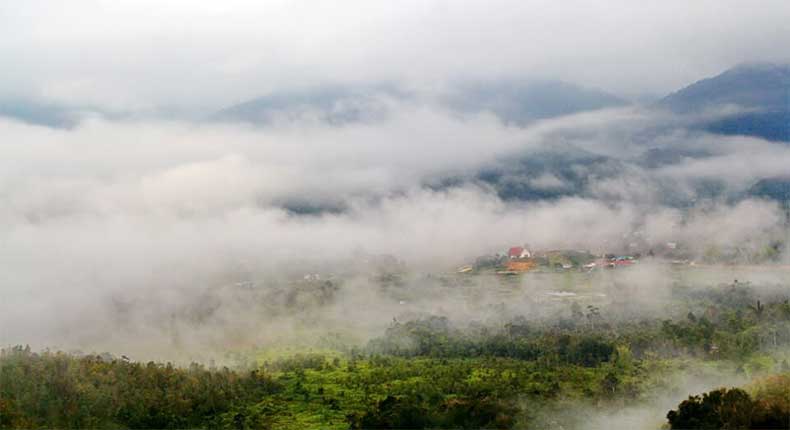 Borneo is known to be one of the largest non-continental Islands in the world and the largest island in Asia while being the 3rd largest island in the entire globe. This island is positioned at the geographic center of maritime southeast of the Malay Peninsula in Asia and within the greater Sunda group of the Malay Archipelago.  It is located to the north of Java and situated to the west of Sulawesi as well as to the east of Sumatra, while to the Northwest, the island is bounded by the South China Sea and surrounded clockwise by the Sulu, Celebes seas and the Makassar Strait and well as the Java Sea. However, this huge island is divided into 3 different political parts and thus administered by three different countries that is the Brunei occupying the North western coast, Sarawak (East Malaysia) and the Indonesian part known as Kalimantan which occupies the central and the Southern part of the Island.  Indonesian territory occupies the largest part of the island at about 73% as the other regions such as Sabah, Sarawak, and Labuan occupy the rest of the island.

Borneo is one of the world’s largest islands has a population of about 20 million inhabitants with most of the people residing and living in the coastal cities.  The population of this island is largely constituted by the Chinese, the Dayak, the Banjar and the Malays ethnic groups.  In addition, the island is known to be characterized with different religions, with almost every distinct ethnic group practicing different types of religion from Christianity to Islam and Hinduism as well as Buddhism and Animism.  However the most prevalent religions are Christianity and Islam followed by a few Hindus and the others. Their exist some other tribes who not only practice the traditional religions, but still holds on to their ancient traditional heritages and cultural practices such as nomadic hunting and gathering, sea and boat dwelling, nomadic existence and forest inhabitancy.

Traveling to Borneo can be a very interesting adventure, from its luscious rain forest to endangered wildlife and diverse culture.  The Island is characterized with beautiful natural scenery and historical establishments and structures as well as a spectacular tropical equatorial climate, not to mention various cultures and activities.  This Island is indeed the perfect destination for every passionate traveler and nature lovers, who would want to go for an adventure.  The island straddles the equator and is characterized with luxuriant equatorial rain forest and boasts of remote jungle beauty to tropical climate adventure and numerous tribal cultures. Typically, this island is known to be home to almost a half of all the known animal and plant species in the globe.  Traveling to Borneo will present to a wildlife wonderland which comprises of some of the renowned animal species such as Orang-utans, the Sumatran rhino as well as Bornean pygmy Elephant, not to mention the hundreds of thousands of flowering plants. Typically, this island is a colorful and a magnificent paradise that presents a relaxed adventure from its idyllic and captivating beaches to scenic mountainous forest as well as with its rich cultural heritage and practices.

Once in Borneo, you will most definitely find this island so interesting, the island if full of adventures and interesting activities such as engaging in a visit to some of the stunning spots in Sandakam such as Borneo historical temples, museums and harbor side markets.  Furthermore, you will be able to go trekking through the lush and luxuriant rain forest in Kalimantan which is inhabited with incredible wildlife such as the Orang-utans and many other forest wildlife.  When you head to Lankayan still within the island, you will never lack some captivating moments to engage in, the area is dominated with Green Turtles which cross over to come in order to lay their eggs.  If you explore the Sarawak by boat then you will not only be able to take a dip in the shaded pools near the Clean water caves but you will also be able to explore some of the breath taking caves in Sarawak.

Traveling to Borneo whether as a tourist, on formal trips or on business occasions, will present to you a destination that will definitely leave a memorable experience in your mind and tailor made fun for your satisfaction.  The land is full of fun, relaxation, exploration and adventures.  Borneo as it is mainly described as a lush land of tribal warriors, with mysterious head hunters as well as far from home war heroes is full of intriguing adventures that attracts every passionate traveler, anthropologists and even adventurers.  One can never miss to check on the steamy rain forest jungles, balmy beaches, and blissful mountains to the peaceful villages.

There are numerous top most natural attraction in Borneo that you will dare not to miss. Some of these spots encompasses the Mount Kinabalu; characterized with interesting and beautiful animals as well as beautiful vistas, the Poring Hot Springs, the Bako National park, the Turtle Island; characterized with the endangered green and hawk bills turtles. In addition, there exists the Kinabatangan; the district of Sabah renowned for incredibly diverse ecosystem and an array of wildlife, the Kutai Sultan’s palace; an architectural marvel, the head Hunters trails with mysterious footsteps and wondrous natural sites, the Mulu National park, the Danum valley and the Gaya Island which is characterized with tropical fish and activities such as Scuba dive and tropical beauty not to mention the Camp Leakey, the Equatorial Monument ,the Jami Mosque and many more.

Traveling to Borneo will not only take you through the museums, historical adventures, magnificent architecture, parks as well as natural scenery, but you will also experience the culinary taste of the island.  You can sample some of their cheap food from the street, as well as to engage in delicious expensive banquet in exquisite hotels and resorts within the island. The Borneo cuisine is characterized with a distinctive Chinese and Malay influence with food such as fresh fruits; banana, durian, jackfruit to dishes like the Sarawak Laska, seafood; crabs, fish, pawns as well as the Tuak which is a locally brewed rice wine.  Some of the renowned spots and hotels by which you can sample these food ranges from the local night and hawker markets to which you will be able to find low cost food. Otherwise, some of the renowned food joints and restaurants include; the Ocean’s, Dandito, the Baatakan, the Kenari, the Pondok Borneo as well as the Baso Sapi and many more.

Furthermore, if you are passionate about shopping, then you can visit some of the Borneo’s urban settings, renowned cities and towns such as Kuching, Sibu, Bontang, Balikpapan, Sandakan just to select a few of the commercial spots and be able to do your shopping. You can either visit the hawkers market and to acquire your favorite artefacts, clothing, accessories and many more which will ensure that you traveling to Borneo is indeed memorable. Therefore, some of the renowned shopping spots include the Mall, Pasar Gadong, Jalan Gaya, Tawau bazaar, the Night market, the Weekend market and many more.

Whether one is traveling to Borneo or within this island, you will require an efficient and effective transport system in order to fully explore this spectacular island. The island is accessible from the continental mainland by either air or water, otherwise once within the island then one can move by plane, by rail, road, and boat as well as even on foot. The island is connected to the outside world by air and water to which some of the renowned modes of transport include the longboats, boats and ferry bus as well as by taxis, by boat not to mention the moving about by the single railway line in Borneo which is otherwise not priced for a guided tour and the for public use as well. These means of transport will improve your mobility thus increasing the rate and the extent of your travel and adventure.

Borneo’s climate is tropical, it is hot and humid. Sarawak experiences heavy rain during the monsoon once a year in between November and February while dry season happens from May to October, but it is hot and humid most of the year. There are tendencies that heavy rains might cause flights’ cancellation as well as the riverboat trips into some regions.

In Sabah, there are two seasons: The dry season occurs from February to August and there occurs the wet season from the month of September to January.